This site is a celebration of reggae music in general and a revival of my book REGGAE (-->) of 1979 in particular.

The book was published 30 years ago in Norwegian (and remains in Norwegian here). Norway may be an unlikely place to promote reggae music in the broad sense of rub-a-dub and street disco sound as I do in my book. The country is a fridge. No outdoor life. And in 1979, hardly a black person to be seen. (They were there, they just weren’t seen.)

I first went to Jamaica in 1978 to find out ”all” about reggae music in order to write a book. I was 25 at the time, confident and quite inexperienced.

The year before a friend had given me a handful of promotion samples from Virgin Records’ new reggae collection. I was stuck immediately. I could listen to nothing else. This being ages before the internet was invented, there was nothing to read about this incredible new sound, nothing I could learn about it except what I could hear, and the lyrics weren’t the easiest for someone who had hardly grasped schoolbook English. Nevertheless. I left the chilly Norwegian spring and arrived in Kingston, Jamaica in April.

In Kingston I was knocked out by the tropical weather for about a week before I decided I had to get to work. My first encounter was I-Roy, starting a romance that lasted some five years. Besides being a great womanizer, he was also one of the reggae scene’s most eloquent and intelligent voices.

Of course I also met a string of other reggae DJs, singers, musicians, producers, etc., too many to mention here, most of them though mentioned in my book.

In the tropics, and of course in Jamaica, people lived their lives outdoors. Never-ending reasonings in large (or smaller) groups. A spliff is passed from hand to hand. Someone brings a portable stereo. Or maybe a car suddenly stops, doors open, a large number of people pour out, mostly men, and the doors are left open with the car stereo to entertain the crowd. Always roots reggae, always in the air, everywhere. Such were my working conditions.

I spent hundreds of hours in the recording studio, almost all of the time in the Channel One studio right in the middle of the ghetto. This does something to your ears. You get so used to the crisp, clean and clear and vibrantly living sound that for the rest of your life you are never, absolutely never content with the canned out-of-studio sound. Since my reggae days in Jamaica I have spent thousands of any currency trying to buy myself out of that canned-sound misery. All in vain. 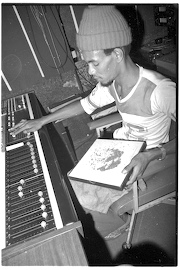 At Channel One, Bunny (on the right) reigned. I also met King Tubby and Harry J. Sadly, I missed Lee Perry, who was having one of his periods of madness. I remember people showing me the X’s he had scribbled on buildings all over town.

I went home, wrote about two thirds of the book, ran empty, went back early next year, and having spent altogether about three months in and out of the studios and dance hall scenes and about the double of that time at home pondering like writers do on all kinds of dilemmas connected to another sort of canning – that of squeezing a whole culture into a book – finally the book was released September 1979 from one of the two ”most major” Norwegian publishing companies.

It lasted ten days. For ten days the book sold like ice-cream on the beach. Then the major publisher – my publisher – all of a sudden withdrew the book from the bookstores and even denied me access to the publisher’s building.

What had happened? Oh ... The Ganja chapter, that’s what happened.

Actually I had warned them. I had pointed out for them the Ganja chapter and asked them to read it carefully and to be prepared. This was 1979. There were severe penalties for possession of any small amount of Ganja, though at the time the Norwegian public didn’t know nor use that word for it (but I explained in detail all about terms and use in my book). There was a subculture of youth, of course. And there was a major publishing house unaccustomed to it all. I had tried to avoid a scandal by explaining all these things for them, but they didn’t listen.

It wasn’t exactly what my book told about ganja-smoking in connection with creation of reggae music that did it.

It was what the newspapers did.

It was when the newspapers started to write (though innocently enough) about this connection between reggae music and ganja – referring to my book – that the publishers went bonkers. They just couldn’t take it.

In the end of the day, I had to raise a substantial amount of dunzeh and actually buy my own book back from them in spite of their refusing, flatly, to have anything to do with me or my book, not to mention fulfilling their own contract and sell the book. Finally and slightly surprisingly I was my own publisher. And so I have remained to this day.

Parallel to the preparation of the book’s release in 1979 I made contact with a small bunch of (overwhelmingly white) local punk fans in order to start a ”Reggae Club” – that is, a weekly discoteque playing only roots reggae music – in Oslo. This was the first time ever that a music venue was established in Oslo explicitly to make black & white people meet and mingle. What a club! Every Wednesday our dance floor was packed by hundreds of people. After a while we also got a couple of black DJs to join us.

Indeed, the release party for the book in Oslo in September 1979 culminated into the grand opening of the Reggae Club the same night, featuring as its international guest of honour and visiting DJ the reggae star I-Roy. He came to Oslo to promote the book and the club, being also the most prominent source & protagonist throughout my book.

The book was a great success and so was the club, which lasted for about three years. At that time I had gone tired of all the infighting among my fellow club initiators, mostly about money. I left both the club and the money, and after a little while there was no club and no money. I must emphasize that those responsible for all this fighting and the vanishing of the club’s financial resources were a little group entirely white, young Norwegian men. Our African and Caribbean DJs had already left when I left, mostly due to the same young white Norwegian men’s reluctance to give them more influence in the club, a matter in which I was overruled, being in minority.

Thus, by 1983 the Oslo Reggae Club belonged to the glorious past. It only lived on in the fond memories of young people. Even after 30 years I still meet people, now middle-aged, who talk enthusiastically about ”those Reggae Club days”.

What was the club’s success due to? Pretty much the same as the book. What we played and promoted was street-cred ”mainstream reggae”. Roots. Superstars like Bob Marley & the Wailers were largely ignored by us. No harm done. They were played everywhere else. We played all the DJ artists, even dub, and singers who were simply not played anywhere else, people like Tapper Zukie and not to mention Lee Perry, the greatest genius of them all and unheard of in the regular dance scenes in the Norwegian capital.

Also, there was the mingling factor. Black and white people met and formed lasting friendships and sometimes even more. The club regulars used to call me ”Big Mama”. I was very proud of that.

Needless to mention, the book lived on as well, and people have asked to buy a copy of it to this day, as it is nowhere to be found in the second-hand book shops in spite of it having sold in two or three thousand. There has also and perhaps unsurprisingly been no other book out in Norwegian on reggae music.

The early death of I-Roy and dozens of other great reggae personalities is first and foremost – directly as well as indirectly – a legacy of the colonial power structures which still dominate the third world and cripple its inhabitants. Though singing and shouting for freedom – and indeed being listened to by the whole world – they are enslaved in the indignities of being defined as inferior and given no means to break the boundaries that surround them.

We who survive due to the same structures must honour those who did not – and incidentally also whose who are still out there – by listening carefully to their music.

On this site I shall publish the whole of my 1979 book in Norwegian, in small portions, with short summaries in English. I’ll also publish photos from the book, mostly taken by myself, and some photos that were not included in the print version.

I’ll also give you soundbites from the vast world of perhaps the most intriguing and all-absorbing musical subculture ever. Welcome to the world of roots reggae. It dread. To illustrate and enhance the content of the book this celebration features fair use music samples of 30 seconds and some of the great coverart of the period + YouTube videos - on pagebottoms - whenever I could find a good presentation in the same vein. 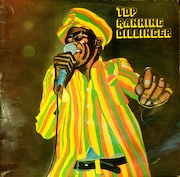