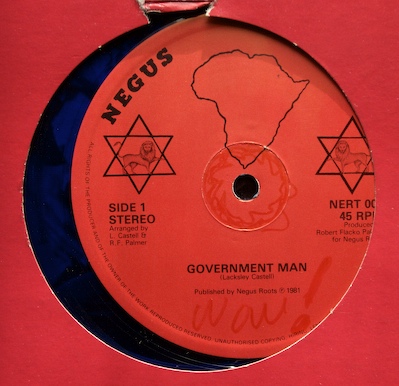 I-Roy says: Babylon has proved its inability to do anything right for its people. People need bread, and Babylon’s answer is birth control. People need shelter, and Babylon builds skyscrapers to make money on them. People are cheated all the time. They are turning their backs on their cheaters.

Lacksley Castell: Government Man. On a Disco-45 produced by Negus Roots around 1980.
Lacksley Castell is one of the lesser known Jamaican vocals; he died in his early 20’s in the mid-80’s, having recorded only a few but largely distinct productions. This is one of them.