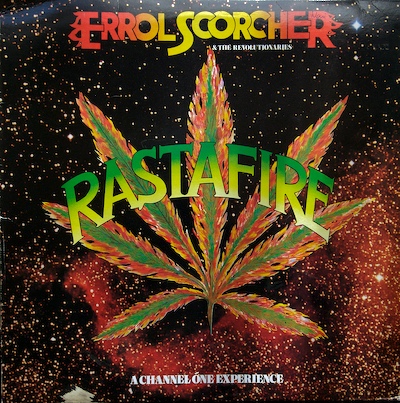 I-Roy is setting off to record his 1979-album ”The General”. First step is to try to find The Revolutionaries. There are six individuals in the world’s most significant reggae band; this makes it six times more difficult to assemble them. – It takes six hours, a few bottles of beer, two pounds of kali herb, a bag of money, and an alert studio engineer (Bunny at Channel 1) and the session is completed. – A few days after the studio session with The Revolutionaries, the next on the list are The Horn Bredren. Same procedure, and the instrumental is complete. But Bunny refuses flatly to record the DJs talk-over the same night. That must be left to another appointment.

Errol Scorcher & The Revolutionaries: Cardiac Arrest. From the LP ”Rastafire”, Ballistic Records, 1978.
A sweet and typical Revolutionarlies/Channel One production with one of the less fussed-about DJ artists Errol Scorcher as co-producer.