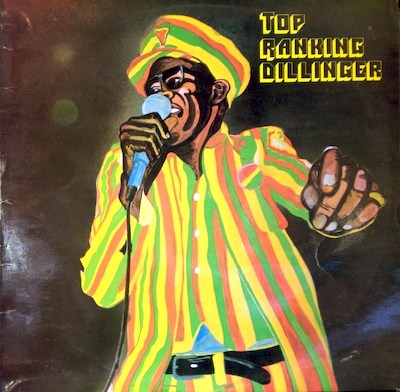 Roots Reggae, Rub-a-dub style, is hardly ever played ”live” at concerts or gigs, like European youth expects music to be played. That is not desirable and probably not even possible. Instead, it is played to the dancing public from records, at discos. We now follow the preparation of one of the currently most popular discos. It’s called People’s Choice. The man behind is Perry White. The year is 1979. In the early afternoon, his house starts to fill up by young men ready to try out the disco system which is stored in the house.

Dillinger: Rat a cut bottle. From the LP "Top Ranking Dillinger", Third
World Records, 1977. Produced by Bunny, also known as "Striker" Lee.
The DJ artist Dillinger has been extremely productive throughout the
years - he was born in 1953 and was as such a member of the "second
generation" of DJs. His style is both very typical for his time and an
excellent example of real roots entertainment.