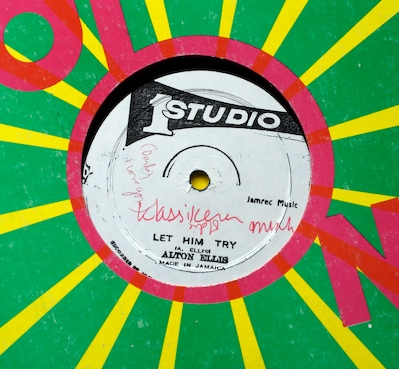 In 1968, again there was a shift and a change of name, without any clear reason. From now on it is Reggae. The group Toots and the Maytals are credited with the new name as they were the first to use the world Reggae in a recording. Also, in the recording studios new things were going on. Someone – notably King Tubby – started to play disrespectfully with the recording equipment. The new creation was called Dub. Along with Dub, the DJs grew up to become mature artists in their own right, creating that mixture of original sound, dub, and the DJ’s own contributions that the world had never heard before.

Alton Ellis: Let him try. Disco-45, Studio 1. Produced by Sir Coxsone in 1968.
Alton Ellis was a well-known Reggae singer in the generation before the nowadays more famous Gregory Isaacs. He was born in 1938 and died in 2008, having set his mark on both ska, rock steady and reggae. This is probably
his most wide-spread sound.