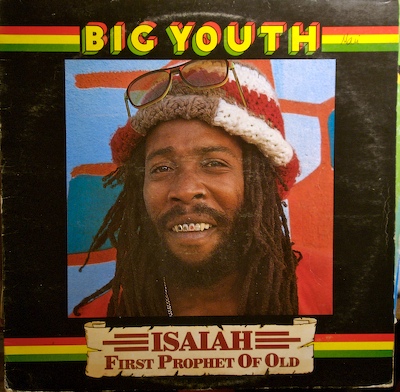 An Emperor and a Bible

November 1930, the Ethiopian Prince Ras Tafari was crowned to Emperor of Ethiopia, and took the additional titles King of King, Lord of Lord and the Conquering Lion of Judah. In Jamaica, people studied their Bibles and found that this was it, this was Him, this was the reborn Messiah. Local prophets included Leonard P. Howell, Joseph N. Hibbert, and Archibal Dunkley.

Another early Rasta leader, inspirator, or fraud, depending on the angle, was Claudius Henry. In 1959 he distributed postcards that people perceived as tickets to Ethiopia. The police raided his compounds and found marijuana. The society as a whole knew nothing of Rasta religion and symbols. It all started to get rather polarised.

Big Youth is a DJ artist, which means he is a commentator more than a singer. His project is sincerely social (which in Jamaican reality means both political and religious) and his sound is very compelling.